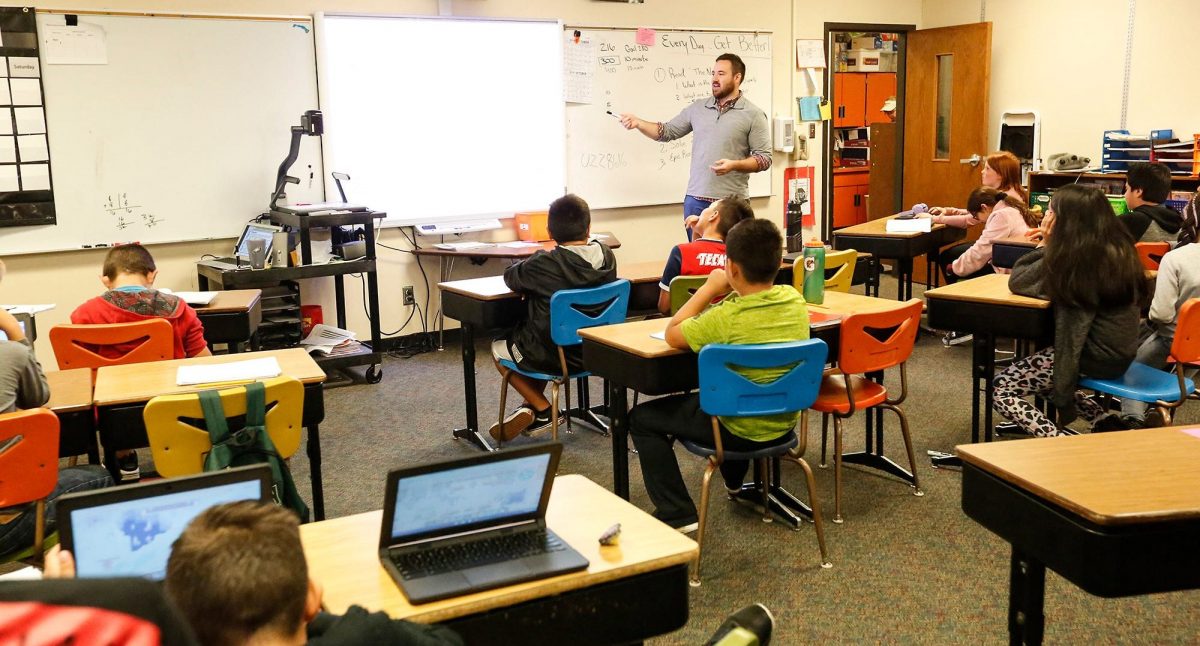 Author’s note: I originally wrote and published a fairly garbage hot-take on this topic where I reached the wrong conclusion because I missed a single word in the proposed law. This updated version of the article corrects my initial reasoning.

A friend sent me an article the other morning, the headline of which I could hardly believe:

A $5 Million Fine for Classroom Discussions on Race? In Tennessee, This Is the New Reality”

I immediately assumed this headline was misleading as a result of biased journalism and letting feeling override logical thought. I figured it would be an article meant to reinforce the coastal elite stereotype of the South as a place where such racist, restrictive laws come from. And as I’ve learned in the past five years, just because it’s written doesn’t mean it’s true. To find out whether it really is what it is alleged to be, we have to carefully analyze the actual text of the proposed law.

Before we go through the law, though, this kind of fear over what people’s children may be exposed to is far from new in American discourse: we’ve argued over violence in media, sex education versus abstinence, and even de-segregation. It wasn’t too long ago that the Intelligent Design theory camp was pushing for science classes to “teach the controversy“, either. What is it that people are so concerned about? Rational and moral people should all agree that schools should enable healthy discussion and understanding of race, discrimination, and prejudice in social studies and history. But people seem not just worried, but frightened that their children are going to be subject to intellectual brainwashing that may do untold harm to their development as human beings (now, I am not saying that this is the absolute reality; I am saying that this is what many people are afraid of). Whether or not these kinds of incidents are widespread seems to be up for debate, but we should acknowledge that such examples are worrying for the prospect of a free-thinking society that seeks truth.

What people are concerned about being taught and are taking extreme steps in an attempt to mitigate generally are Critical Race Theory (CRT) and aspects of the 1619 Project curriculum. Of course, there’s a bit of debate about what CRT is and what gets to be called that, but I’m going to avoid the nonsense detour for what it is and go for the most authoritative definition I can find: reference books. All the encyclopedic definitions have the same gist, but I submit that her Majesty’s Britannica says it best: “race is not a natural, biologically grounded feature of physically distinct subgroups of human beings but a socially constructed (culturally invented) category that is used to oppress and exploit people of colour”. So, if this is what CRT is, then it’s clearly a non-starter and is in the same hallowed company as classic double-bind, “white fragility“.

The concern about CRT-related content being taught in schools is often referenced as an extension of the 1619 Project. The 1619 Project was/is a journalism-project-turned-curriculum of civil-right journalist and author Nikole Hannah-Jones meant to refocus on (1) the consequences of slavery and (2) the contributions of black Americans. As something students might study in a secondary school language arts class and contextualized by a capable teacher, the essays and poems written for it have at least some role in an educational exploration of the roots of America and its culture.  The 1619 Project’s inaugural essay by Hannah-Jones, America Wasn’t a Democracy, Until Black Americans Made It One is well-written and exemplary in its commitment to self-expression, and as long as it is presented as someone’s subjective opinion rather than an ideal worldview, I can’t see what’s wrong with high schoolers reading through it. Other essays as part of the 1619 Project, such as “Why Is Everyone Always Stealing Black Music?” and “How Segregation Caused Your Traffic Jam“, I will leave to a later time to explore.

So, overall, yes, CRT is bullshit, and the 1619 Project’s material is of varying quality. But neither of these are actually mentioned in the proposed legislation. When I wrote my first draft of this article, I skimmed the preamble and went straight to the section which enumerated what the law seeks to avoid. My initial understanding of the law was that it sought to ban the promotion of the following concepts. My comments are encapsulated in parentheses and italicized:

“1) One race or sex is inherently superior to another race or sex (Seems rational to me. I wouldn’t want my son or daughter being taught they are better or worse because of their race or sex, nor do I want anyone else to be taught a sexist/racist paradigm of understanding the world or themselves.);

2) An individual, by virtue of the individual’s race or sex, is inherently privileged, racist, sexist, or oppressive, whether consciously or subconsciously (This also seems fairly straightforward. Individuals should be judged by the content of their character and their actions.);

3) An individual should be discriminated against or receive adverse treatment because of the individual’s race or sex (seems pretty clear that we shouldn’t do this based on section VII of the Civil Rights Act of 1964);

4) An individual’s moral character is determined by the individual’s race or sex (I would hope this elicits no controversy);

6) An individual should feel discomfort, guilt, anguish, or another form of psychological distress solely because of the individual’s race or sex (Given the current focus on inclusivity and LGBTQ rights, I think that this should not be controversial, though it should be a given for race, sex, sexual orientation, disability, or any other immutable characteristic);

7) A meritocracy is inherently racist or sexist, or designed by a particular race or sex to oppress members of another race or sex (Meritocracy is a concept for the advancement of individuals based on their achievements. The only claim of oppression one could make is that it oppresses those who cannot achieve. Those who are less able to achieve still need a place in society as well as purpose. However, for society, including governments and businesses to run effectively, the best person for that job should indeed be the person hired for that job. We have plenty of experience with politicians who have sidestepped meritocracy via nepotism to suggest that a meritocracy is the best option);

8) This state or the United States is fundamentally or irredeemably racist or sexist (The USA certainly has a history of racism and sexism amongst its population. So does every other place in history. I do not excuse any of it, but it must be highlighted that societies can change and grow as they learn. The key word here is irredeemable. If one believes something is irredeemable, it means they do not believe that people have the ability to change or learn, to not be what they once were. If one believes that, why even bother?);

9) Promoting or advocating the violent overthrow of the United States government (Don’t see a problem with this as it’s quite standard, e.g., to immigrate to the US lawfully one must attest to this.);

10) Promoting division between, or resentment of, a race, sex, religion, creed, nonviolent political affiliation, social class, or class of people (this seems like basic non-discrimination/sensitivity training to me); or

The amendment goes on to to clarify that the above in section a) does not prohibit an LEA or public charter school from including:

“1) The history of an ethnic group, as described in textbooks and instructional materials adopted in accordance with part 22 of this chapter;

2) The impartial discussion of controversial aspects of history;

3) The impartial instruction on the historical oppression of a particular group of people based on race, ethnicity, class, nationality, religion, or geographic region; or

“What’s the problem,” I thought. I published my take on the EdWeek and sent it to a few friends. I originally concluded that the legislation seemed to just attempt to avoid affecting children negatively by promoting racist and sexist concepts. Reception was mixed. My more conservative friends agreed and thought it was a good article, but my more liberal friends took issue with it. To paraphrase, I believe the feedback I got was that my article “sucks” and I “totally missed the point” of the law. How would this be, though? I spent hours analysing the language and writing up my thoughts! Well, because, like a dumbass, I missed a very important word in the preamble:

Not just promote. Include. This means that the law would effectively ban discussion of any of those concepts.

There’s no way around the fact that this law is censorship. I am no friend of censorship, and I believe we should be able to discuss anything we like however we like in public and private, including internet commons, and let the truth be found that way. When we ban discussion of ideas, we do so at our own peril because it means that people will reach their own understanding of those ideas that misrepresents the concept. Read the Manifesto of the Communist Party, read Mein Kampf, read Anders Breivik or whatever you want, just make sure it’s properly contextualized so it’s not being read as fact. Bad ideas need to be discussed and criticized. CRT should be discussed and criticized, as should any idea that students are interested in learning more about.

As a teacher, I am not comfortable with the idea that any teacher be worried about accidentally breaching into an area of discussion that is somehow “illegal” in an academic context. It’s incumbent on the teacher to approach any topic carefully, with full understanding of the subject and their audience. No good teacher should ever willfully make any of their students feel guilty, superior or inferior for any immutable characteristic they possess. Thus, if concerned parents want to improve the quality of instruction in schools, then then need to allow specifically for the critical discussion of any ideology.

I understand that those who support this law have valid concerns about the quality of teaching and classroom context for CRT, the 1619 Project, White Fragility, or any other ideologies that are byproducts of the well-meaning Zeitgeist. As someone who taught for over a decade, I grant that what is taught in classrooms has little chance of being parsed critically even in universities, and almost no chance of being critically examined by high-schoolers (I only started being able to think critically and synthesize my own knowledge to an effective degree around the age of 32!). Point being, adolescents and even adults are generally taught to “learn” (memorize) what they are being told. Is it morally or socially responsible to torpedo students’ understanding of themselves or the country they call home? We are already living through the consequences of an unsure and insecure generation not sure of what their values are except money, and the outcome isn’t good. But censorship is rarely the lesser of two evils, and it is always a sword that cuts both ways.

So, as a teacher, news editor, and someone who has lived under some degree of censorship and oppression, I find that I have to object to the proposed amendment. No, I do not think adolescents should be taught racist or sexist concepts that make them feel of unequal worth, which the first section of the bill seems to attempt to prevent. Because it would make even discussion (not just promotion) of ideas illegal is a dangerous move, it takes the already censorship-crazy culture of America into an even more dangerous position.