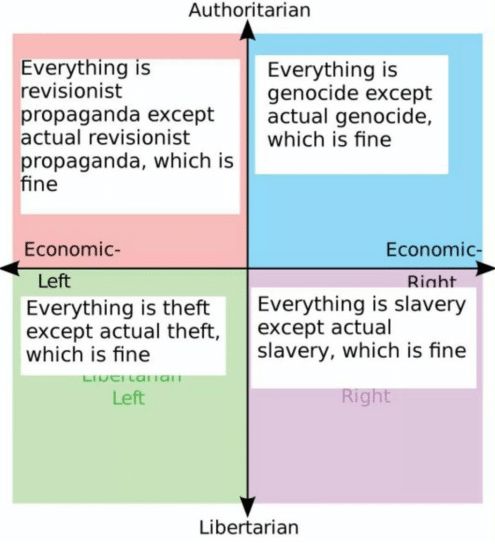 This post is spurred by the feeling that a lot of people who mostly know me through my social media think that I’m “drifting right”. I would say that my life experiences over the past decade (particularly the last 3 years going from the takeover of Hong Kong to the preposterous shenanigans of living with COVID in the USA) have very much pushed me to highly value individual liberties.

Obviously, pure libertarianism isn’t a great idea because we need some degree of civil servantry to help those who are unable to help themselves and provide a degree of medical care and welfare, but seeing the reality of what happens to people once they have been completely disempowered by their government, the very people who are supposed to serve them, has made me extremely wary of any structures of power that create a power imbalance.

The problem with a power structure that has no oversight is that even if it starts off functioning well because its filled with good people, eventually those good people will move out and bad, power-seeking people will move in. See: American politics, Hong Kong, and just about everywhere greedy, corrupt, power-seeking ghouls seek control over others that infringes human rights. When that happens, there are a few recourses:

1) People can vote (this was denied to Hongkongers);

2) People can protest (this was denied to Hongkongers);

3) People can speak out against oppression (this was denied to Hongkongers);

4) People can physically fight back against oppression (this was denied to Hongkongers. You couldn’t even buy a laser pointer there).

Watching that happen to my adopted home was and is one of the most difficult things I’ve had to endure. I feel dirty even writing that, because that’s absolutely nothing compared to those who were born there and had families and had nowhere else to go, or the so many who were raped, tortured, or murdered there because they protested for freedoms Americans and many others take for granted.

As I grew up in an extremely progressive anti-gun home (in an extremely privileged and safe area during an equally privileged time, I should add), I somehow knew nothing else about them other than they enabled murders and would just “go off”, killing family members accidentally on a regular basis. Watching the complete disempowerment of people in China and Hong Kong first hand made me realize that having a population with the ability to defend itself is absolutely crucial to the preservation of a free society and to keep people safe from government overreach.

This isn’t meant to be a 2A post, however: I want to draw people’s attention to the major trends that have been occurring worldwide over the past 25 years of internet and technological development. I’m not talking about Mr. Potatohead, Starbucks logos changing, or confusing pronouns:

1) Massive expansion of unconstitutional, unethical, and dangerous surveillance power. A lot of this was granted via the Patriot Act, which was perhaps the biggest American blunder of the 21st century even considering Iraq and Afghanistan.

2) Increasing corruption in politics, leading to a resurgence of power-hungry, dishonest, career politicians who do not have your best interests at heart. How many millionaires are currently serving in congress?

4) Increasing international instability, including an expanding totalitarian China fighting to create a new global order, financing of cartels in Mexico, and using those cartels to destabilize Mexico and the US. At the same time, people and the mainstream media take a blind eye to our southern neighbour and our border. You do not want the cartels operating in America, but they already are.

5) A major increase in authoritarianism within the US. While Facebook, Twitter, and Google, et al. have long embraced censorship whenever it aligned with their own political/financial interests, 2021 has been marked by increased censorship pushed by the administration via threatening of tech giants with anti-trust action. The results of the administration’s pressure have already manifested in Google’s changes to their ad policies (the financial backbone of much of the internet), the White House directly flagging posts for Facebook to remove, and Apple adding a backdoor to its encryption. And they are far from done.

6) The global trend is a massive push from the ruling class and those who serve them to control the citizenry using technology, automation, and propaganda (media that favors advocacy over truth). Much of this has been pioneered by China, and autocrats and technocrats everywhere, including the USA, have been eyeing China’s iron-clad control over its subjects with envy.

The above is far from an exhaustive list; I didn’t even bring up climate change and the destruction of our environment, but my point is that people don’t trust authority for good reason: it’s shown itself time and time again to be untrustworthy. When people don’t trust authority, they are rightfully less willing to give up their responsibilities to authority. We know that the police don’t have the manpower, willpower, or funding to be there right when you need them. Nobody is coming to save you. You need to be your own rescuer.

What gives me hope is that it seems that more and more people are waking up to the overt manipulation by legacy media, which seems to serve mostly as a mouthpiece for the ruling class (political and business elite). Even Americans who still subscribe to the partisan narrative that the real enemy is the other half of America rather than the corrupt and power-hungry elite are starting to realize that authoritarianism is a double-edged sword, and when they seek to cancel others, those same powers are quickly turned back on them.

To paraphrase an anonymous and sagely YouTube comment, “the two party system really sucked, but this one party system is completely fucked.” I hope people are starting to realize that they have ⁠— and have always had ⁠— the tools within them to learn and make their own choices that are best for them. We can’t keep outsourcing these decisions and rights to those who have done nothing but drive the world into the ground and hope that maybe this time, this time, things are somehow going to be different and our problems will be solved.

The reality is that most problems are almost entirely only capable of being solved by ourselves as individuals and communities. And most of those problems aren’t even external; they are our own insecurities, weaknesses, and biases. We should all start by endeavoring to solve our own problems, and once we do that, we can start to take responsibility for things beyond our own body and work to improve our local communities and beyond.